This piece was made as a reflective assignment for the online training that I am currently taking...

“I did not wade in the water to test it, I jumped right in.” – Lana Jelenjev

It took me a few days to reflect on the activity on autobiographical artifact before fully embarking on the task of writing it down to words. I have been mulling about what my autobiographical artifact is/ are the minute I read it as part of the requirement of the orientation period. Although at the bat of the eyelash so to speak, I would be able to tell upright what my autobiographical artifacts are but thinking about it for the past few days made me realize that there is more to than just knowing what these artifacts are. Reflecting on the terms “autobiographical” meaning a book about a person written by that person himself/herself and “artifact” which is a byproduct/something made, gave me a moment of pause. What is it exactly that has shaped or made me as the person that I am and why do I think of it as such? That question cannot be answered without mentioning the persons who molded me into being. I can say I am who I am because of the empowered women who brought me up to this world. I would never have this passion for living, giving, caring and moving things in certain directions if I have not been raised by the two most passionate women I know- my mother and my grandmother.

My father was, in most of our childhood years an absentee father, working abroad for a great part of our childhood. He was someone we only knew with letters and packages sent from the post. For a great deal of my and my brother’s lives it was just my grandma and my mom who were our source of sustenance and support. Growing up as a child, I knew my mother as the hard working, career oriented woman that she was and I knew my grandmother to be the firm and stable hand that guided us. This I am reminded of literally as images of my grandma, my brother and me holding hands crossing a busy street in Manila (and jaywalking to boot!) comes to mind as I am writing this. But what was even more striking as I remember that event so many years ago was the firmness of her hold- yes that is what my grandmother is to me. As my mother worked to provide for us, my Nanay, as we call her (although the word means mother in Tagalog), has always been our steadfast hand. She held on to us and nurtured us in ways we thought as children to be too strict but now as adults I deem grateful for. She may have her outbursts and has given us our share of mild punishment for the mischief that my brother and I had gotten ourselves into as young children but her touch has always been the one that led our path straight. She taught me sacrifice, love, and determination especially after hearing her story of being widowed at a very young age with 4 small children and how she brought my mom and her siblings on her own with all of them getting a good education. I was at awe when I found out her life story. When I was old enough to process who my Nanay is in my life, I knew her to be my “Superwoman”. The strength of her character and her determination is unparallel. No matter what I do with my life, I know I can never match the sacrifices she made, the life that she lives and the amount of giving she showed to us and also to her immediate surroundings. She is and always will be “Super Nanay”.

My mother deserves a special mention too when thinking about people who molded me into being. Although I can say that our relationship as mother-daughter was not the ideal as how I would have wanted it to be, but I realized more on who she was and why she was like that only when I was already in college and took up psychology courses. My mother is the calm, quiet and introspective type. The memories I hold of her in bursts of excitement was the time she had her career going for her. I guess I got my passion for work from her. How I remembered her before she stopped working (when my father finally decided to stop working abroad and opted to find work in the Philippines) and the time she became a fulltime housewife were so different. Looking back, I think she missed that spark in her when she gave up her career. The spark that I saw when she first brought me and my brother in her workplace. Seeing all those computers at that time, my brother was in awe of the machines, while I was in awe of how she was with her colleagues. That was her element. She was in her turf.

The years that followed in between the time we moved to Angeles and the time of my parents’ separation I would think of as her dormant years. She seemed to others as settled but now as I look back, those were the years I think she was stifled. She had to stay at home and care for us, engaged in a-not-so-serious buy and sell business. She was still quiet but the serenity wasn’t there.
When my parents separated and we were faced with a big financial problem because of my father was the time I saw a different side to my mother. That was the first time I saw her cry and I was already in my teens at that time. Growing up, I felt that she was so distant that I even at one point (which I regretted the most) wrote a letter to her saying I thought of her as an Ice Queen. But to see her cry for the first time in my teenage life, I was faced with a mother who felt and showed her vulnerability. Ice Queens don’t cry but at that night my mother did. I couldn’t even know what she felt because she didn’t share her thoughts and feelings. She kept a lot to herself. But in the face of everything that happened what I saw in her from that point on was a woman determined – she tried however way she can for me and my brother to finish our education. We may not have our fancy house and lot, our car and all the fancy things we used to have before but we did get something far better. We gained our mother back. She may not have moved in the circles that she used to be with before when she was working but as she tried her best to financially provide for us she started going out of her shell. She met new people and through grit and determination she managed to pull our family through. She was my “Superwoman Number 2”.

My mother’s strength of character and determination was tested in the remaining years of her life. All those pent up emotions finally got the better of her as she was diagnosed with breast cancer. For years she battled it, going from one doctor to another. The countless hospital visits we’ve had. But those were also the years that drew me and my mother together. As sad as it might sound but those were our best years as mother and daughter. Those were the years when I can fully see who she was from a young woman’s eyes and not from a the eyes of a flighty teenager with an axe to grind. If only we could have such maturity as teenagers, then I probably would not have given her so much difficulty as a teenager when I insist on getting some things my way. Then I would have spared her from further hurt by throwing things back at her as why things are this or that. But there would always be that world of “if-only”. I am just glad that somehow I got to give back to my mother the care that she deserves. The time I spent taking care of her made me realize a lot about her and what I/we missed out from each other because of our personality differences. I am flighty, she was stable. I am vocal, she was quiet. I am outgoing, she was an introvert. But taking those differences aside and just seeing her in bed lying next to her at night and at the point when she was really in pain and singing her lullabyes for her to sleep, I knew I was not so different from her after all. We were both vulnerable, yet determined. We were both scared yet trying to keep our strengths and wits together. We were both in pain and we shared it each night that we were together.

I do miss my mom so much and the birth of our daughter made me long for her to be with us. But I know that her legacy will always be there. We might have gone through the mother-daughter relationship so differently from what I am doing now with Katie but I’m parenting in as much grit and determination as I have learned from her.

Together with my grandma, my mom taught me passion- to be brazen in life and to embrace it. This is why if I am asked what moves me? I would say I would like to be a pebble thrown in the pond. The kind that stirs and creates ripples. Life is too short and too fleeting that it is such a waste not to be doing your passions in life. My mother died when she was 49 years old. My grandma, who at age 81 is still feisty. She manages to cook, clean, and make my knees buckle when she growls. But both made the most out of their situations, when life throws you lemons, you make lemonade. This is what my mom and Nanay did and more since they shared their “lemonade” with the people around them. When asked the question “who would you want to be when you grow up?” Some people might say how they would want to be like this or that person, my answer to that? I would say if only I can have half of my mom’s and grandma’s strength of character and determination then I would be, in my eyes, that ideal person.

Now how about you, what is your autobiographical artifact? :) 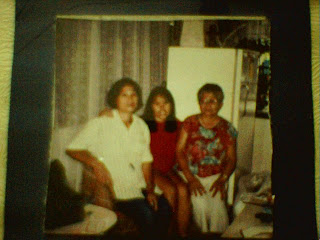 Posted by Lana Kristine Flores-Jelenjev at 5:59 AM

Lana Kristine Flores-Jelenjev
Amstelveen, Netherlands
Passionate and loving wife, mother, friend, teacher, trainer... I go by different roles but nothing beats being my husband's best friend and a playmate to Katie and Milos :)